How To Prime A Dewalt Grease Gun? 4 Steps

As useful as they are, Dewalt grease guns and other grease guns have a common challenge. Air gets trapped in them after changing their cartridges. And you will have to prime the grease gun to get the air out of it. If air is still trapped in a grease gun, it won’t dispense grease.

This means that if your grease gun ceases to dispense grease, especially after you’ve just refilled it or changed its cartridge, it is likely that air is trapped in it. Here, you’ll learn how to prime a Dewalt grease gun. And the steps are likely to work for some other brands of grease guns.

How to Prime a Dewalt Grease Gun? Easy Steps

This method is for a Dewalt grease gun and other grease guns that have an air bleeder valve.

Step 1: After successfully changing the cartridge of the grease gun, locate the an air bleeder valve. It’s like a bolt at the top of the gun.

Step 2: Loosen or unscrew the valve until grease pops out from it. That’s a sign that air has escaped. If air has not escaped, the grease won’t come out.

Step 3: Screw it back and wipe the grease away.

Step 4: Test the grease gun and see if it works. Of course, it should work now that the air in it has escaped.

Step 1: After refilling the gun, try to push the plunger inward.

Step 2: You won’t be able to push it in if there’s air in the barrel. So, you’ll have to twist the handle of the plunger a little.

Step 4: Turn the handle of the plunger back and push it inward.

This method works for Dewalt and other brands of grease guns.

How Do You Load a Dewalt Grease Gun or Change its Cartridge?

The first thing is to unscrew and remove the barrel. Next, remove the empty cartridge from the barrel. Bring out a new cartridge, and remove the cap at the base. Also, you’ve got to pop off the top. Now, you can slide it gently into the barrel. Screw the barrel back into place. And then, pull out the plunger and push it inward to the last.

That’s all. You’ve just loaded your Dewalt grease gun. Of course, many other grease guns can be loaded this way.

How Do You Refill a Dewalt Grease Gun?

You can refill a Dewalt grease gun from a bulk grease container. First, you have to remove the barrel and get out the piston. Change the orientation of the rubber seal at the top of the piston. Instead of facing down towards the handle of the plunger, turn it up to create the suction effect.

Now, you can fit it back into the barrel and immerse it into a container of grease. While the barrel is dipped in grease, push down the plunger and pull it up. As it goes up, it will suck up the grease. So, the barrel will be filled with grease. Just couple it, and you’re good to go. 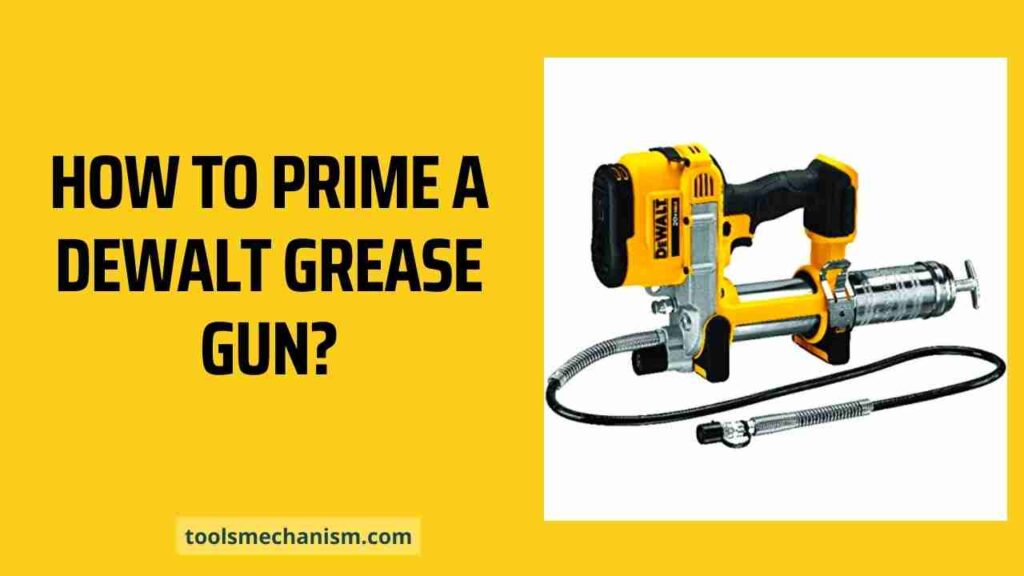 Once you allow trapped air to escape, this grease gun will start working again. Air problem often occurs after changing the cartridge. You need to open the air bleeder valve and wait until grease pops out from there before you screw it back. You need to master it because air will often get into it.

How To Clean A Grease Gun? Fast and Easy Guide