How to Bleed a Grease Gun? 6 Easy Steps

Regardless of the type of grease gun you own or use, whether it be a manual lever, pistol grip, pneumatic air-powered, cordless electric, or mini grease gun, one of the most common problems you will run across are air pockets trapped in the gun.

An air pocket can impede and interrupt the continuous flow of lubricant while you are greasing your equipment or machinery. It will literally block the air pressure that you are trying to pump with. Continuing to pump your gun to try and force the grease out risks doing damage to your grease gun.

For this reason, many grease gun designs include an air bleeder valve to assist you in resolving this problem quickly and easily. Often, when you reload your grease gun, either with a new cartridge or even manually, air can become trapped in the grease load even without you realizing it.

This is especially common when spooning grease into a gun and packing it down manually, however, it can happen with any grease gun loading regardless of which method you use for refills.

It can also happen when your gun barrel or cartridge is almost empty or if you have purchased a new grease gun and are loading grease for the first time.

When you hear or read “Bleeding” in reference to a grease gun it means bleeding the air out of your gun. Some grease guns will have an air bleed valve that screws into the gun generally at the top of the gun.

As it is normal for some air to get trapped inside during a reload or cartridge substitution, bleeding your gun becomes necessary for the correct functioning of the gun.

Step 1: Open the grease gun barrel and prepare the gun

Remove the empty grease cartridge if you are reloading. If the gun is new remove the gun tube so it is open.

Pull out the rod handle completely and lock it into place.

Step 3: Prepare the grease cartridge and insert or refill the barrel tube with grease.

This means that when you return the gun head to the grease barrel, the new grease will not immediately enter the gun head because of this air pocket. Even if your gun does not use a  cartridge, this is true.

Tip: Even if the pumping mechanism has a spring, it will not be sufficiently strong enough to push the entire supply of grease upward if there is an air pocket or space.

Take the newly filled barrel and screw it completely into the gun head. Now unscrew it once or twice so that it remains a bit loose. This will free the air at the top.

Push the rod handle all the way into the barrel. Begin to pump or turn on the grease gun if battery operated. When a small bit of grease emerges, hold the handle pressed down and close and retighten the grease barrel.

The gun is primed and ready to lubricate.

Preparing to Bleed a Grease Gun

You need to load your gun with grease using one of these four common methods:

When loading or reloading a grease gun, you also need to prime your grease gun especially when it is new. With a new grease gun, both the hose and the gun will be filled with air as there is no grease yet. For this reason, you prime your gun to help expel all that unwanted air. Unfortunately, because there is no grease you end up pumping more air. So, the goal is to get the grease moving upward and out of the cartridge or barrel into the gun head.

For those that are reloading grease guns, you can keep your gun a bit primed always by simply avoiding allowing your gun to empty completely. If you pump a gun that is finishing that last bit of grease, as it empties and you are still pumping, air can enter into the grease hose.

Why Is There No Grease Coming Out of My Grease Gun?

At times, you may realize that your grease gun no longer pumps grease out. It is a common problem and there are three major reasons why grease may cease from your grease gun. The three reasons have been stated below.

Probably you didn’t fix the cartridge properly. This problem occurs when you’ve just installed a new cartridge or when you just reassembled the grease gun. Pull out the cartridge and re-insert it. If it still does not work, dismantle the entire gun and reassemble it according to the assemblage instructions on the user manual.

Air may be trapped in the grease cartridge. This problem often happens when you’ve just installed a new grease cartridge. So, you have to loosen the tube slightly, then turn the cartridge counterclockwise 2 – 3 times to allow the trapped air to escape. Push the handle in and out continuously until grease begins to come out from the gun. Then, you can re-tighten the cartridge while you hold the tube down.

If none of the three quick fixes work, there may be a major problem with your grease gun. Contact the distributor or a specialist.

How Do You Release the Plunger Lock on a Grease Gun?

You need to first unlock the plunger rod handle. You unlock it from the end cap by depressing the lock lever and pulling the plunger rod back. You have to do both simultaneously because they work simultaneously. The plunger will be disconnected from the rubber assembly automatically. Now, you’ll be able to push the rod all the way into the barrel.

Of course, you may find it slightly difficult the first time. But as you do it often, you’ll master it and it will become much easier.

It is not uncommon for oil to leak out of the grease gun when stored. What causes this is that part of the grease will naturally melt and the oil will drip out, leaving the remaining grease too hard to use. If the dripped oil can still be retrieved, you can mix it back into the grease to restore its thickness and quality. If not, the remaining hardened grease may no longer be useful.

So, it is a good practice to store new tubes and grease cartridges upright. And if you prefer to leave the cartridge in the grease gun, make sure you depressurize your gun before you store the grease gun horizontally. This method helps to lock the grease gun from dripping oil. 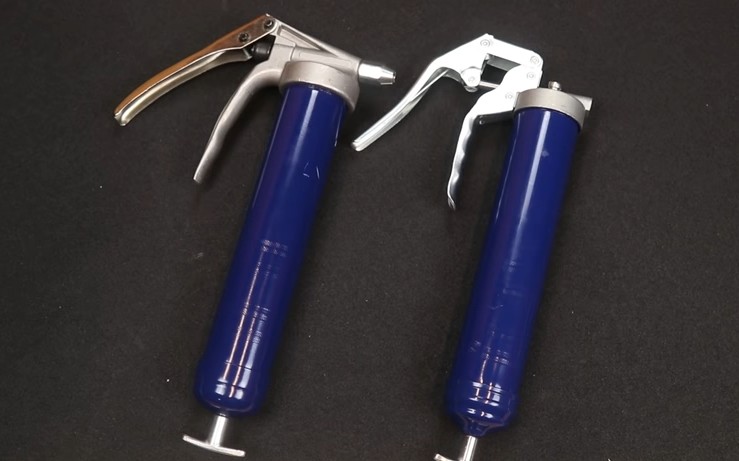 Storing your grease and grease gun properly will help to extend its durability. This is why you need to follow the best storage practices.

How To Purge Husqvarna Hydrostatic Transmission?

How To Load a Mini Grease Gun? Top 3 Methods