The Milwaukee M12 grease gun is used to dispense grease into machine parts with ease and without causing a mess. Electric or battery-operated grease guns don’t make as much noise as pneumatic grease guns. They are quite handy and easy to use.

Below is how to quickly fix the airlock issue in your Milwaukee grease gun.

How to Fix a Grease Gun? 3 Easy Steps

The number one complaint heard in reference to grease gun functioning is that the gun stops operating after a new grease cartridge is inserted. Most of the time this is due to a pocket of air trapped at the gun’s top. When you try to push the grease out of the nozzle, the air blocks it, and nothing comes out. That’s where priming your grease gun can really make a difference. To resolve this, follow these easy steps:

Step 1: Rotate the grease gun’s base in an anticlockwise direction to release the trapped air. Two to three rotations should be adequate.

Step 2: Make sure that you are pumping the gun while you are rotating the gun base, to help pump the air out of the gun.

Step 3: Once the trapped air leaves the grease gun, lubricant will begin to flow from the gun. At this point, you rotate the gun base in the clockwise direction until it closes snugly.

Your gun should be ready to function properly. If the pumping action proves to be insufficient and the grease still will not come out of the gun, you may need to intervene manually by pushing the grease load right up to the cartridge rim yourself. Keep a rag on hand.

Perhaps you’ve just acquired a new grease gun and it doesn’t seem to be functioning as it should. Even if you have experience with lubrication and various kinds of grease guns, every new gun can present its own set of difficulties. But the great thing about grease gun use is that even the problems that appear to be insurmountable usually have a resolution.

Why Won’t My Grease Gun Work?

There are a number of reasons why a grease gun may not be functioning properly. Here are a few of the more common difficulties that you may encounter:

Tip: Store your grease gun correctly by hanging it horizontally and with the gun’s plunger detached from the grease tube.


How Do You Get Air Out of a Milwaukee M12 Grease Gun?

Step 1 – Turn the newly-installed cartridge anticlockwise 2 – 3 times. When you do that, the air trapped in it will escape.

Step 2 – Loosen the tube slightly and pump the handle in and out for several minutes until grease starts to come out. This should not take you more than 3 minutes. You need to place the dispensing mouth of the gun on a piece of paper or cloth to avoid messing your workplace up with grease.

Step 3 – With the handle pushed in, tighten the grease gun the way it was before you loosened it. And your grease gun is back.

If you use a manual grease gun, the spring not working properly is also a common occurrence. It just may not be providing adequate pressure to push the lubricant into the feed cavity and out through the coupler.

The best way to resolve this is by getting a brand-new spring for your grease gun from your local hardware and supply store. Take your grease gun with you and ask if they can install it for you

The Piston or Follower Rod:

If your grease gun is older and has seen better days, check to see if the piston rod shows signs of rust or corrosion. With corrosion, the rod may not work any longer.

A common complaint is that the plunger is too stiff and won’t work. If the gun is new, it may just be a bit stiff and if you push a bit more to break it in, it should begin functioning more smoothly. If you have recently replaced the gun’s plunger, check to see that it is not too large for the gun itself. In this case, it will not work.

Tip: If the follower rod or plunger appears to not be working or entering the gun barrel, make sure that the rod is not locked into place by the follower plate. Twist the rod a quarter turn to unlock your rod and plunger.

If your gun’s coupler shows any type of damage, this may impede grease from flowing from the nozzle. If so, replace the coupler with a new one by unscrewing the old one and screwing on a new one. 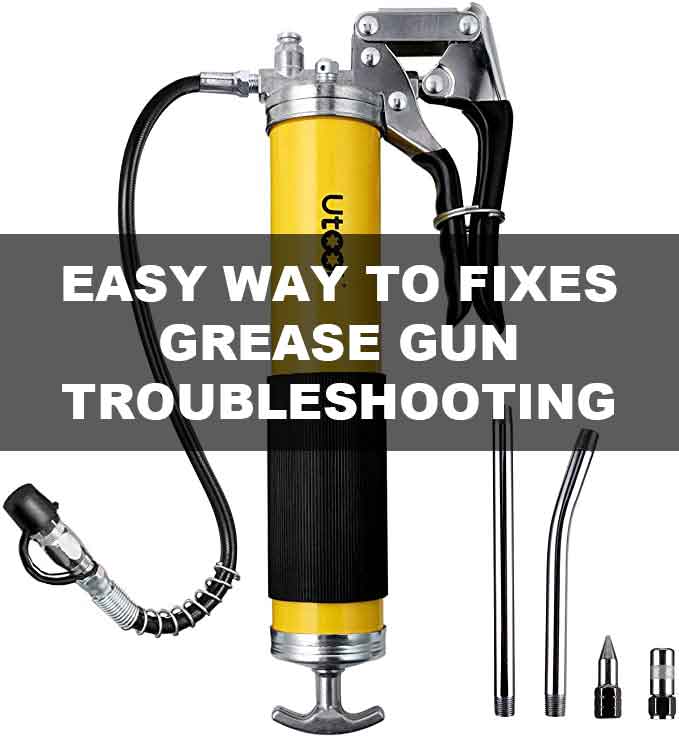 To avoid messing up your workplace with grease, place the dispensing mouth of your grease gun on a piece of paper towel while you remove the air in it. One great feature of this grease gun is that a single battery can use up to seven filled cartridges.

According to the manufacturer’s precautionary warnings, make sure there are no children, pets, or bystanders when using the tool. They could distract you and make you lose control. Also, don’t use it in the rain or close to inflammable substances.

Most operating problems with grease guns are due to air pockets that are trapped at the top of the grease cartridge. You may also experience this if you manually load grease with a spoon and pack method. This is the easiest problem to fix as it only requires purging the air or install it for you as detailed above or by using an air bleeder valve if your gun has one.

How To Load a Mini Grease Gun? Top 3 Methods