How Do Hammer Drills Work? You Should Know

Hammer drills are power tools commonly used for masonry tasks and beyond. It carves and cut out shape and designs on bricks and hardened concrete surfaces.

Hammer drills attract some sophisticated features that make them stand out. In fact, if you’re keen on buying a powerful tool for implementing masonry tasks, then you might want to check out how hammer drills work first before adding it to your shopping cart.

Before now, you might have even gotten a myopic insight into its essence. Empirically looking at it, you would find the chuck, discs, ridges, and bits. These features are common in cordless and corded hammer drills, but there’s more to learn.

Moreover, one of the fascinating importance of hammer drills is that they can serve as regular drills and jackhammers. But how would you switch between these features when using it? Furthermore, hammer drills revolve around 30,000 per minute and more, making their performance more potent than regular drills.

How Do Hammer Drills Work?

Hammer drills could be in cordless or corded form. Insert the battery or plug the cord into a power outlet. Identify the three modes of your hammer drill.

Hammer drills often have the modes to be hammering mode, drilling mode, and a combination of hammering and drilling mechanisms.  Find out where the mode-switching button is situated on the power tool so that you can choose among the options.

There is always a pistol-like trigger that commands the cam-action of the unit. The trigger controls the initiation of the performances. So, there’s a need to select the mode before pulling the trigger.

When used as a regular bit, the motor begins to drive the bits and propel the hammers to make explicit pushes as they move forth and back when used in the hammering mode.

The ultimate feature is using the proper bit. The two discs on the hammer drill have ridges, and there are chucks. The triple-jaw chucks grip the bits firmly as the bit rev thousands of times within a minute.

Grease the bits so they can enter the chuck trough at the tip impeccably. Hammer drills are powerful tools that could rev the bits forth and back more rigorously than regular drills.

Therefore, the bits have to fit snugly in the slot to ensure there’s no wobbling. Also, ensure you set the hammer drill in a regular drill mode.

There are two essential functions. The first is the hammering, and the second is the drilling. The hammering mode enables the drill to deliver pulsating hits on the workpieces. It does this with so much intensity that the bombardment of the ridges on the workpiece does the same work like a jackhammer.

However, the rotatory mechanisms occur when one is using the drilling feature. The discs would have to rub past each other to propel the ridges’ movement in a rising and falling motion.

The rising and falling motion of the ridges causes the pulsating knocks in the hammering mode. The chuck swivels at a high rate when the hammer drill is set in the hammer and drilling mode.

Pulling the trigger isn’t enough to get the job done but pressing the discs against the workpiece. The pulsating knocks will consecutively land on the load at high revolution not until the tip is removed from the workpiece.

Once the hammer drill is removed from the load’s surface, the clutch detaches itself from the discs, and the machine stops until there’s another contact between the power tool and the workpiece. You can remove the bit after this if you’re using the dual option.

What is Hammer Drills Used For?

Hammer drills produce higher power than regular drills. They can drill hard surfaces and can serve as a jackhammer.

They can drive nails into concretes, bricks, and hard surfaces. The power tool can work in the same manner as a regular drill.

Can I Use a Hammer Drill as a Regular Drill?

Yes, you can. They look the same. The only difference between them is that a hammer drill produces more power than a regular drill, but you can regulate it to a standard mode. The discs have ridges that execute the hammering task. Meanwhile, each of the ridges is more than 1” thick, depending on the unit you’re using.

What is the Difference Between Hammer Drill and Regular Drill?

What is Special about a Hammer Drill?

Hammer drills enable you to multitask. You can use it as a regular drill. In fact, the high power a hammer drill generates makes it reliable in denting holes in bricks better than the regular ones. Its vast value makes it way better than its comparisons.

Hammer drills use special bits for masonry tasks. The masonry bits are specialized for denting bricks and rocks. The carbide-tipped masonry bits are available in various sizes and could be used dependably. Nevertheless, its 3-jawed chucks could accommodate standard twist drills.

Can Hammer Drill be Used as a Screwdriver?

No, it can’t, but it can drive in screw safely, quickly, and precisely into hard surfaces and flexible materials. However, it can’t be used from scratch. Denting a hole of ¼” on the workpiece first before using a hammer drill instead of a jackhammer makes one’s work come out so neat.

Can a Hammer Drill Go through Wood?

Yes, it can drive in drills and knock nails into woods because its bits and rpm can be regulated. You can change the revolving speed of the unit to enable it to work on different tasks. You can read the manual with the machine you bought to learn how to use a hammer drill.

Is a Hammer Drill Worth It?

Yes, it does. This power tool could be used as a regular drill and a jackhammer. In other words, buying this is the same as saving some bucks. The power tool can switch between modes to make your work easy and fast to execute. And when it comes to performance, since you buy from a reliable source, you can always rely on the best. 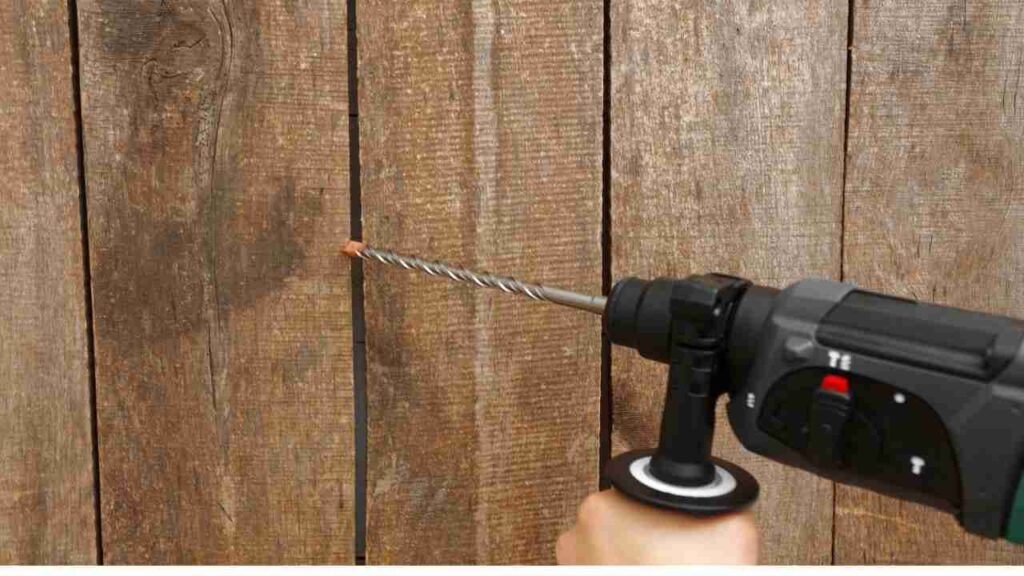 This is how hammer drills serve as a jackhammer and a regular tool. The fixation of the bits and the hammer drill could be initiated for use instantly as long as one knows how it works. Set the unit up using the right bit for the right task and press the unit against the workpiece. Always check your work every 30sec to know about the power tool’s performance to get your precision right.

How To Put a Bit in a Hammer Drill? 14 Steps

How to Use a Ryobi Hammer Drill? 9 Steps