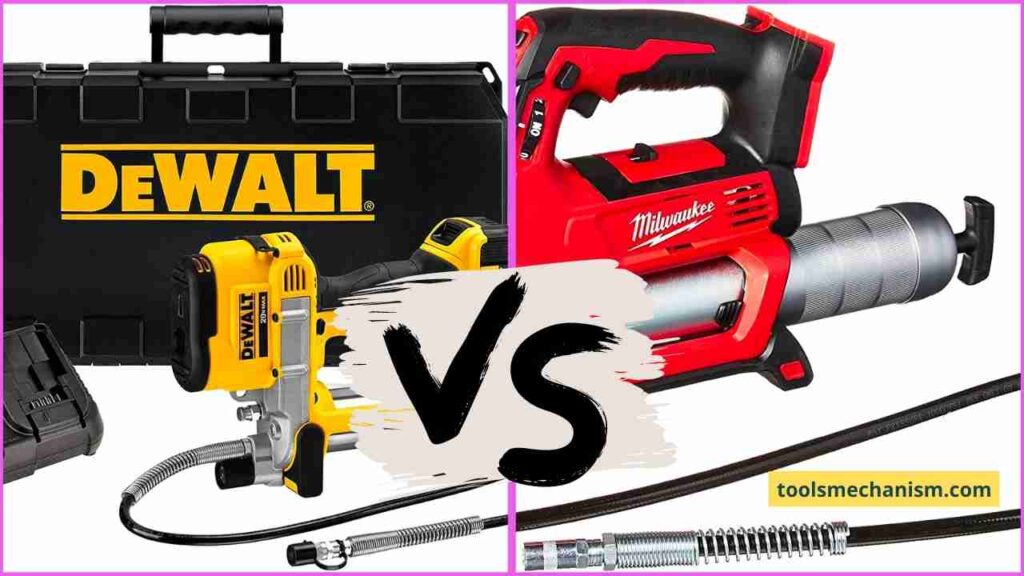 Milwaukee and Dewalt are two of the best brands in the manufacture of grease guns, and they should be. Their grease guns are easy to use, highly efficient, and durable. That’s why this article is about Dewalt grease gun vs. Milwaukee. In case you’re planning to buy a grease gun, and you’re torn between buying either brand, this article is for you.

Although you may be looking out for which is of them is better, neither of the two products is clearly better than the other. Each of them has its highs and lows, and they have their edges over each other. In the end, you’ll have to choose which is more suitable.

So, take the time to read the article to the end and choose which one suits you more. In addition, you’ll see the answers to some frequently asked questions about both brands of grease guns. The more information you have about your preferred gun, the better you can handle it. And on that note, let’s get started.

Generally, it’s a smart idea to go through warranty conditions to understand what the warranty covers and what it doesn’t cover.
That way, you’ll be on the same page with the distributor in terms of the warranty. And you’ll understand and avoid the situations that can void the warranty on your grease gun.

On the other hand, the Dewalt grease gun can dish out up to 16 cartridges of grease on a single charge. This makes Dewalt the clear winner on this.

The lighter a device is, the easier it will be for you to carry it around. That’s why you may not like the Dewalt grease gun for weighing 14.8 pounds while the Milwaukee M18 grease gun weighs only 9.3 pounds. Well, you can say the Dewalt grease gun’s discharge capacity of 16 cartridges on a single charge is a great tradeoff.

Now that you’ve seen the major differences between the two branded products, you can choose the one that suits you more, even though you’re good with either of the guns.

As you can see, the Milwaukee M18 wins in terms of flex hose length (48 inches), Warranty (5 years), and weight (9.3 pounds), While the Dewalt wins in terms of the number of grease cartridges that can be dispensed on a single charge (16 cartridges). You’ve got to choose which brand suits you more.

All you’ll see are the Milwaukee M12 and M18 grease guns. Well, a 20-volt grease gun may be in the plan of the brand.

Does Milwaukee Make a Grease Gun?

How Much Grease Does a Milwaukee Grease Gun Put Out?

Does Dewalt Make a Grease Gun?

Yes, Dewalt makes a couple of fantastic grease guns, and the guns work efficiently. One of them is the 20-volt Max grease gun. You can find out more about Dewalt’s grease guns on its website, Amazon, and other online stores.

How Do You Store a Dewalt Grease Gun?

You need to store your grease gun the right way to prevent it from dripping and messing up the storage space. That’s because the grease left in the gun tends to melt and drip. And the best way to store a Dewalt grease gun is to hang it horizontally inside a clean, cool, dry cabinet that does not transfer heat.

And you must disconnect its plunger from the tube before you store it. In fact, this rule applies to all grease guns, and not only a Dewalt grease gun.

How Do You Refill a Dewalt Grease Gun?

Now, you can screw the barrel and assemble the gun. There’s a possibility of having some air trapped in the gun. This will prevent your grease gun from being able to dispense grease. If the gun has an air bleeder valve at the top, open the valve and wait until grease pops out of the valve. It indicates that the trapped air has escaped. Lock the valve and test your newly-refilled Dewalt grease gun.

Based on the features of the Dewalt and Milwaukee grease guns, you can’t say one of them is better than the others. Rather, you need to choose the one with more suitable features for you. Milwaukee is lighter, and it also has a relatively longer flex hose. In addition, it is sold with a longer warranty period.