Comparison isn’t always about which product is better. Rather, it is about suitability. So, in the end, you’ll choose the one that suits you most. In addition, there are answers to some frequently asked questions about both products. So, without further ado, let’s get down to business right away.

This is more like a similarity. Both of the grease guns can give an output pressure of about 10,000 psi. There’s no winner in here. With this output pressure, they offer a flow rate of 10 oz per minute.

Also, they have the same voltage of 18 volts. That puts their rate of power consumption at a moderate level.

Milwaukee sells its grease guns with a 5-years warranty, but it’s not clear if Makita offers any warranty at all. A check on Amazon and several other online stores didn’t yield any Makita grease gun with a warranty. So, you have to take Milwaukee as the winner here too.

After checking Makita’s official website, no electric grease gun was found. The brand sells only battery-operated grease guns. Of course, Makita sells some corded electrical tools, but they are not grease guns. Rather, they are blowers and chainsaws.. So, you won’t find any electric gun made by Makita, at least for now.

Yes, Makita makes an 18-volt grease gun. And it is the XPGO1 LXT cordless grease gun. It weighs 13 pounds and gives an output pressure of 10,000 psi. According to customer reviews, that particular model of the grease gun is durable and dispenses grease efficiently.

How Do You Fill a Makita Grease Gun?

One reason why you’ll love this product is the ease of loading it. You can follow the given instructions to refill the grease gun. You have to unscrew and remove the barrel of the grease gun. In the barrel, you’ll find the empty cartridge. Remove the cartridge from the barrel by pulling it out.

Open the air bleeder valve at the top to allow the trapped air to escape. Wait until grease begins to pop out of the valve before you lock it back. And that’s all. Your grease gun is good to go.

How Do You Load a Milwaukee Grease Gun?

The best and easiest way to load a Milwaukee grease gun is to replace its empty grease cartridge with a filled one. To do that, you’ve got to unscrew the barrel and remove it completely. Pull out the empty cartridge. Now, get a new cartridge. Remove the plastic cover at the bottom and also pop off the seal at the top. Gently slide it into the barrel. Screw the barrel and assemble the entire grease gun. 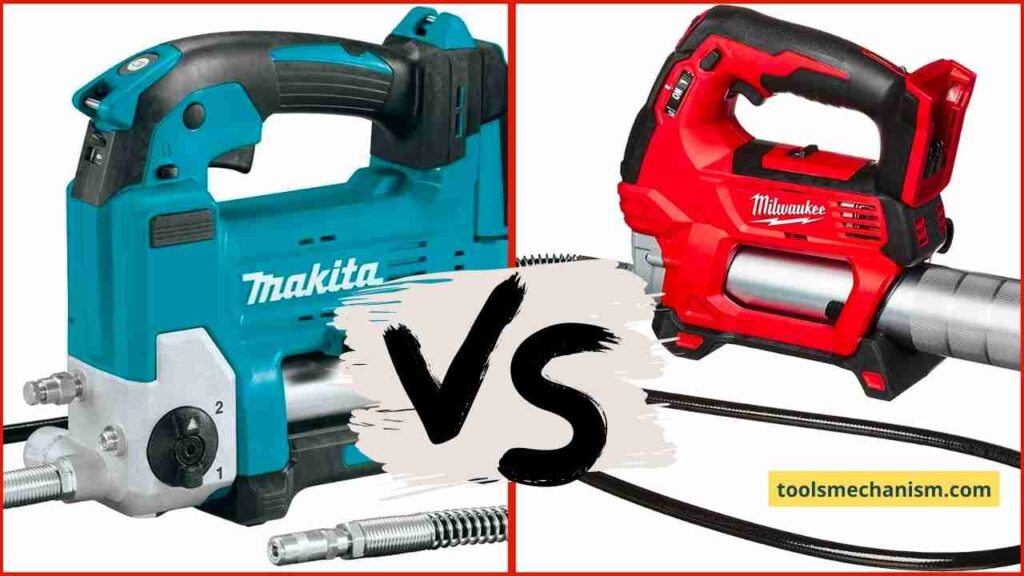 To wrap up this piece, here’s a summary of the differences between the two brands of grease guns. The Makita grease gun weighs 13 pounds, while the Milwaukee M18 weighs only 9.3 pounds. Both of them have a 48-inch-long flex hose each, and that’s great.

The two guns have a voltage of 18 volts and a maximum output pressure of 10,000 psi. Finally, Milwaukee offers a 5-year warranty on its grease guns, while Makita does not seem to offer any warranty.

So, what do you feel? Which brand do you prefer? Here’s the truth. You can choose either of the products. They have more similarities than differences and most importantly, they are very efficient. They’ll get the job done. And that’s why both of them are recommended.

How to Depressurize a Grease Gun for Storage?