However, not every grease is good for all applications. And it can be tempting to want to apply the same kind of grease to all your machinery.  This is not advisable because different types of grease have different additives and ingredients, so their properties are different.

Moly grease is usually in a solid form. It only disintegrates gradually into smaller particles while in use. Lithium grease is often in jelly form. The good thing is that the difference in their shapes and forms do not portend any advantages over the other. You only need to take note of the difference.

Although both types of grease are resistant to water, lithium grease offers a higher level of water resistance than moly grease. Hence, moly grease cannot help much to ward off water ingress. Lithium grease does a lot better.

Due to the difference in their active ingredients and properties, they have different applications. Lithium is multipurpose and can be applied to different areas. On the other hand, moly grease is not suitable for areas that are exposed to a lot of water. Also, you should apply it to bearings with rapid movement.

Moly grease, on the other hand, has a melting point of about 450oF to 500oF. Some experts have pointed out that the advantage that moly grease has over lithium is theoretical. It’s not practical. This is because you’ll hardly find moving parts of metals that can radiate or generate a higher temperature than 400oF.

What is Moly-Based Grease?

The grease is applied to metal components like spline, CV joints, universal joints, and gears. One good thing about moly grease is that its stability is not affected by dilute acid and oxygen.

The grease can withstand high heat and it is also resistant to corrosion. It has high adhesive properties, and that’s why it will stay in place for a long time. Here are some properties of moly grease.

What is Moly Grease Used For?

Moly grease is best for situations where the heat and pressure are high and metals rub over each other. The grease will prevent friction and it will remain in place for a long time. Also, it has the ability to prevent corrosion. The grease is used for heavy-duty machinery.

Based on its features, you’ll find it being used to lubricate axles, bearings, spines, gears, CV joints, and universal joints. The grease gives smoothness and reduces friction in all the areas mentioned above. Most importantly, it is very stable and hardly reacts with any compound. This is why it lasts very long on metals.

When Should You Not Use Moly Grease?

Moly grease’s water resistance level is low. So, it is not applicable for areas where it will be exposed to excessive water ingress. Also, it is not advisable to apply grease to components that move at a very fast rate.

Is Moly Grease Lithium Based?

Yes, moly grease contains a little bit of lithium even though its main ingredient is Molybdenum Disulfide. In addition, the grease also contains base oil and extreme pressure additive. One funny thing about moly grease is that it is not compatible with lithium grease even though it contains a small quantity of lithium.

No. Moly grease is not compatible with lithium grease, so you should never mix them together. If you have been applying one of them to an area and you want to switch to the other, you have to clean off the old grease first. Lithium grease and moly grease have different additives and ingredients.

If you mix them together, it is likely for each of them to react negatively to the ingredients of the other. And they could lose their viscosity and offer poor lubrication. Of course, poor lubrication means the metals you’re trying to protect may wear out faster. 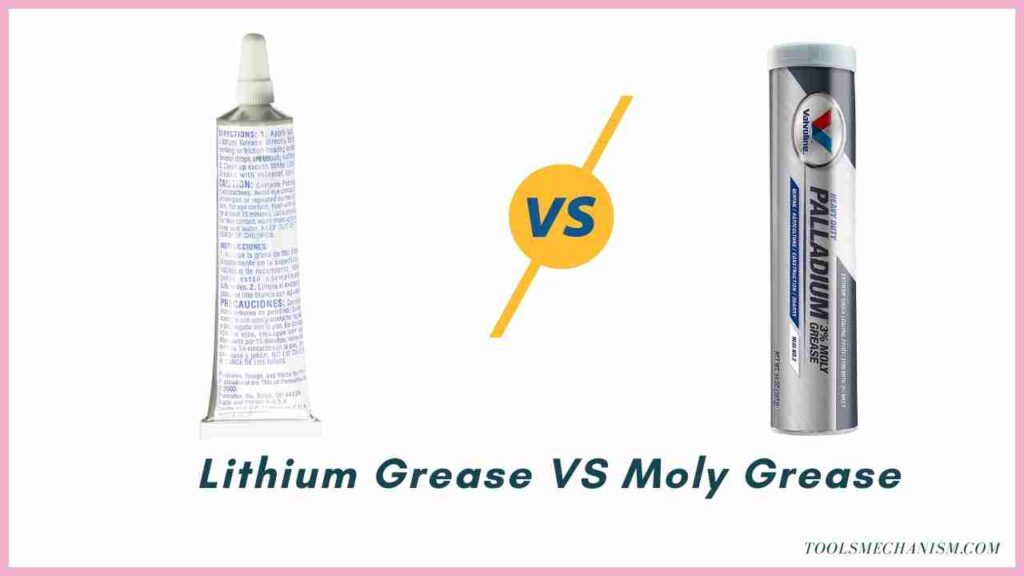 Lithium grease can be applied to all areas, but moly grease takes exception to areas that are exposed to water and areas with rapid movement. Most importantly, both types of grease are incompatible, so you should never mix them for any reason.

How To Grease A CV Axle? 7 Easy Steps

How To Remove Grease From Fingernails? 8 Steps