Whether it’s a motorbike, ATV, car, boat, or even a boat trailer, all vehicles have moving parts. And these parts must be greased regularly to prevent friction, wear and tear, and rust. The two main categories of grease useful for the lubrication of the parts of a vehicle are automotive grease and marine grease.

Although automotive grease is also resistant to grease, its water resistance does not come close to that of marine grease. That’s why marine grease is the best bet for boats and boat trailers.

This is the ability to stick to parts and stay in place. Marine grease is tackier than automotive grease, so it sticks more.

Marine grease lasts much longer than automotive grease when applied to moving parts of vehicles. This is probably because it has a higher melting point.

What is Marine Grease?

Of course, you can use it for regular vehicles too. Marine grease is used for axles, steering bearings, and joints to prevent corrosion and rust and to prevent friction. Here are some of the features of marine grease.

What is Automotive Grease?

This is a type of grease that is specifically formulated for vehicle parts. The grease is used for the lubrication of moving parts of engines. Although it also has water-resistant properties, it can’t resist water as much as marine grease, so it is not ideal for aquatic vehicles.

Automotive grease is relatively thicker than other automotive lubricants like motor oil. That’s why it has more applications. Automotive grease is a combination of additives, thickener, and base oil. Each of the components has its function. The thickener makes the grease thicker and more viscous. Base oil contains synthetic or mineral oil. And the additives give additional functions to automotive oil.

Can You Use Marine Grease on a Car?

Yes, of course. You can apply marine grease to different parts of a car. In fact, it is a better choice than regular automotive grease, especially for the parts that are often exposed to water or moisture, like the underneath of a car.

What is Special About Marine Grease?

Marine grease has several superior qualities, but its best feature is the ability to protect the parts of vehicles from fresh water and salt water. It prevents rust and corrosion. That’s why it is the best type of grease for boats and other vehicles used on water. In addition, you can also apply it to parts of regular vehicles too.

Can I Mix Marine Grease with Regular Grease?

No. It is not advisable to mix marine grease with regular grease because their components are different. For example, white lithium grease is not compatible with marine grease.

Mixing regular grease with marine grease is likely to result in the separation of additives and base oil. This will lower the quality and performance of the grease. This is why you should stick with a particular type of grease.

What Do You Use Marine Grease For?

Are All the Types of Automotive Grease the Same?

No. They are similar, and they have similar applications, but they are not the same. In fact, there are five types of automotive grease, and the five of them are described below.

Generally, there are five types of automotive grease.

This type of grease is formulated for different purposes. It is often made of base oil with medium viscosity. Although it protects engine parts from dirt and water, the grease does not last long. It is ideal for hinges, gears, cables, bearings, and ball joint parts.

This type of automotive grease contains molybdenum disulfide. It is used to lubricate heavy-duty and high-pressure equipment like steering linkages, ball joint parts, and CV joints. Due to its high resistance to friction, it is not ideal for fast-moving metal parts. It will slow such parts. Nevertheless, it’s still effective for lubricating disc brake wheel bearings and chassis grease.

This is a type of white grease that contains lithium soap. The grease is stable and has high resistance to corrosion, rust, and water. This grease can also be used to lubricate door hinges and for other household purposes.

This is another type of multi-purpose grease that has high resistance to water. That’s why it is used to lubricate car parts that are often exposed to moisture. In addition, it protects parts from rust and corrosion. You can use it for universal joints, ball joint parts, chassis, and wheel bearing.

What distinguishes this type of grease from others is how long it lasts. Polyurea grease lasts relatively longer than other types of automotive grease. That’s why it is the best grease for sealed-for-life bearings. It can also withstand high temperatures because its melting point is very high. Due to its additives, it can remain stable under high pressure. Most importantly, the grease is also highly resistant to water. 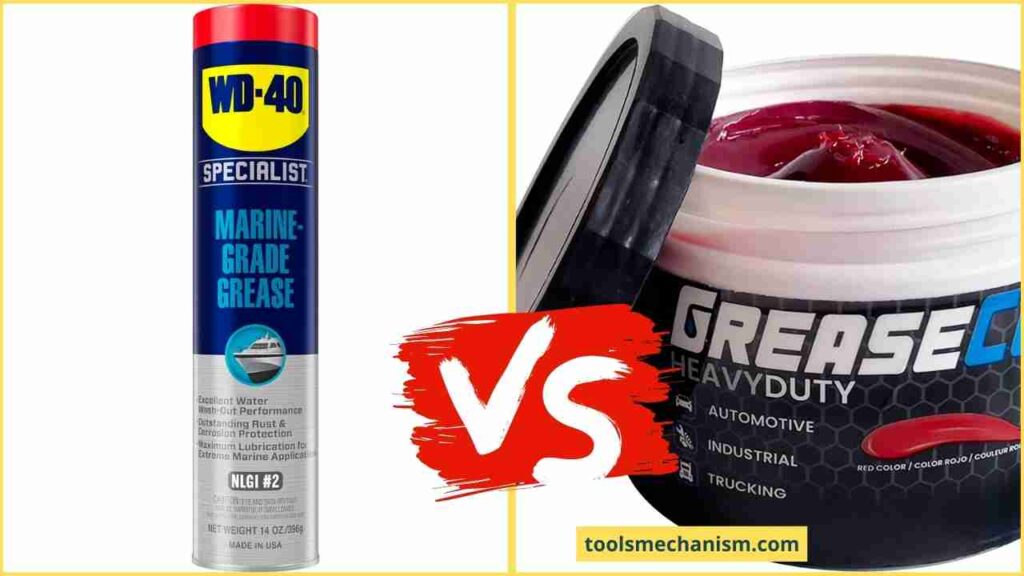 Also, it is not a good practice to mix regular or automotive grease with marine grease because their base oil and additives are different. It may reduce the quality of the mixture.

What is Red Rubber Grease Used For? [Answered]

Do You Need to Grease Sway Bar Links?