How to Adjust the Carburetor on a Troy-Bilt Weed Eater? 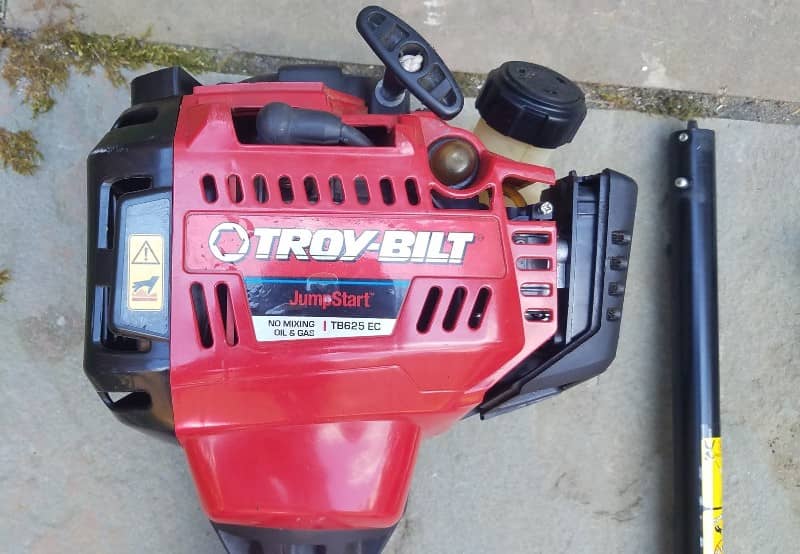 If you happen to own one of the several models of Troy-Bilt weed eaters available for lawn and yard maintenance, you know that these trimmers are terrific for trimming lawns. However, if your weed eater won’t run for very long, or if you turn it on and then it shuts off, it is not only frustrating but drags out the lawn work that you need to finish.

The carburetor is fundamental when evaluating or adjusting a weed eater’s performance. Often these power tools may require some adjusting to the carburetor simply because screws can loosen during use due to vibrations. A new trimmer head or changing the type of fuel mix you use can also affect the carburetor’s behavior.

If your Troy-Bilt Weed Eater doesn’t seem to operate correctly, there is a good chance that you may need to adjust the settings of the machine’s carburetor. If a Weed Eater comes with a two-stroke engine, you will need to make an adjustment of its carburetor periodically.

Mostly all engines that necessitate the combining of oil together with a gasoline fuel mixture may act up. However, the Weed Eater carburetor is relatively small and will only require several minutes for any necessary adjustments.

Generally, weed eaters will use what is known two-cycle engine also called a two-stroke engine. This simply indicates that you will add oil to the fuel manually.

Initially, you will need to locate the two screws for fuel adjustment in order to adjust your Troy-Bilt weed eater’s carburetor. These screws will be positioned on the carburetor’s body. They will have markings of “HI” and “LO” so you can locate them without problem.

Once you identify these two screws, you can proceed to adjust the carburetor.

Spline Tip Tool. This is a tool that looks very much like a screwdriver, but it has a spline tip. If you don’t have one, a hardware store in your area can assist you in finding one.

An alternative is a Pac Man screwdriver.

Now you can begin to adjust your Troy-Bilt Weed eater carburetor.

Step 1: Rotate both of these screws in the clockwise direction until they are tight. Now prepare to adjust their individual positions.

Step 2: Turn the screw with the “HI” marking in the counterclockwise direction for one-and-one-half full turn.

Step 3: Turn the screw with the “LO” marking in the counterclockwise direction for one complete turn. Take your time and do these turns slowly to be as precise as possible.

Step 4: Now locate the choke on your weed eater and pull the cable out to turn on your engine. The engine may initially sound as though it is running roughly, but it needs to keep running. Do this by using the gas throttle. To make a proper carburetor adjustment, the Weed Eater engine needs to be warmed up.

Step 6: Open the throttle completely and evaluate the weed eater engine’s performance. If you hear coughing or sputtering, you need to smooth out the running. You can do this by turning the “HI” screw a quarter of a turn in the clockwise direction. Continue until the engine is running smoothly.

When you complete adjusting the weed eater carburetor and the machine is performing well, you will need to turn it off and allow the weed eater to cool down for a couple of hours. Following this rest period of rest, proceed to turn the weed eater back on and verify if it is running correctly.

If it is not running correctly, the carburetor may require cleaning. Open the carburetor to verify if there’s grime or residual oil build-up inside. If so, a thorough cleaning will be necessary.

Troy-Bilt weed eaters are available in both two-cycle or four-cycle versions. They may also be referred to as two-stroke and four-stroke engines: While they are not specific only to weed trimmers, they are the type of engine that you will find used to power these tools.

A two-cycle engine weed eater will be lighter and relatively easy to maintain. they will cost less but will be louder and noisier. They are also not particularly friendly to the environment producing higher emissions. Plus, the fuel and oil need to be combined with a specific measurement ratio.

The Four-cycle weed trimmer engine will be quieter, produce lower polluting emissions and there is no need to mix gas and oil to operate them. They are, however, heavier in weight and cost more than two-cycle trimmers. Both of these trimmer engines run on gasoline fuel, and both necessitate lubrication.

In fact, two-cycle trimmers need a special oil that you will mix with gasoline to operate it. Lamentably, too little or too much oil can resultin damage to the engine. A four-cycle engine will offer you two distinct chambers for gas and oil. With this type of weed eater, it will be necessary to change the oil at least annually.

These weed eaters have pre-set standard settings when they leave the factory, but small adjustments may be necessary during or after utilization. Your weed eater idles, or maybe its idling speed needs an adjustment to guarantee the optimum performance during use.

With this easy guide, you can adjust the settings of your Troy-Bilt weed trimmer’s carburetor.

How to Adjust Carburetor on Stihl Weed Eater?

What to Use to Clean a Carburetor (Expert Recommendation)