How to Remove Carburetor from Mercury Outboard Engine?

Your outboard’s carburetor is a fundamental part of the boat’s engine. Without it, the engine won’t start up much less go anywhere. The carburetor exists for the blending of the air and the fuel to produce a mixture that is highly combustible for engine power.

With the boating season underway, you may need to replace, rebuild, or clean your Mercury outboard’s carburetor, or some of its components. The method most convenient for accomplishing any of these tasks is by removing the carburetor from the outboard engine.

Even if you are not a marine mechanic, with a little help from your owner’s manual and our easy-to-follow guide, you’ll be able to remove your outboard engine’s carburetor or carburetors relatively quickly.

It is important to remember in what order you remove parts to facilitate reinstalling them in the correct order. It is also wise to lay any extracted pieces on a clean towel or surface to prevent misplacing your pieces, screws, nuts, and bolts.

How to Remove Carburetor from Mercury Outboard Engine?

Step 2: Now you must remove the plastic piece holding the oil tank in place. Unscrew the two screws with the 8mm deep socket for quick removal.

Step 3: On the side of the outboard motor, at the bottom, it is now necessary to disconnect the steering cable and the throttle linkage. Using a 10mm short socket remove the nuts holding the cable and linkage in place.

Step 4: Begin unscrewing the bolts holding the front plate of the carburetor in position with a deep 13 mm socket and 13mm short socket for the lower placed bolts. Unscrew all bolts evenly rather than one at a time.

As the plate loosens and moves forward, the oil tank will press forward so it should be pushed back out of the way and secured in a pulled back position with tie wraps to facilitate the carburetor removal.

Step 5: On the side, where the throttle linkage has been disconnected, pull the linkage to the side and away from the motor and carburetor box.

Step 6: Pull the carburetor box forward, releasing the linkage to the side at the bottom of the engine and releasing it from resting on the upper bolts at the front.

Step 7: Remove the lower bolts by pulling them out and removing them. Remove the box covering the carburetor.

Step 8: The carburetors are now visible and free. Remove the gaskets from the front.

Step 10: With a small pair of cutters, cut several tie wraps holding the carburetors in place. If you have more than one carburetor, make sure to mark the individual carburetors as top, middle and bottom so as not to confuse their original positions. Remove the plastic fitting on the side and remove the top carburetor.

Step 11: Remove the plastic fitting on the side and remove the middle carburetor.

Mercury outboard motors come in sizes that range from 2.5HP to 600HP. As every boater knows, one of the principal problems associated with engine performance is a dirty or clogged carburetor.

To clean or “rebuild” your carburetor, it will be necessary to remove the carburetor and disassemble to clean every piece including every crevice. The success of your maintenance will depend on it.

For Mercury outboard motors with a single carburetor:

Step 1: After removing the cover from your outboard engine, locate the choke knob. It is necessary to remove this knob. On the backside of the choke knob, you will find a horseshoe-shaped clip. Remove this clip by pulling it out and set it aside.

Step 2: On the inboard side of the engine, there will be a screw that holds the choke assembly with its internal components in place. Using a screwdriver, unscrew it and back the screw out without removing it.

Now you can remove the choke knob by pulling it outward. It may seem a bit difficult initially but should pop right out of its position with a little tug.

Step 3: Remove the linkage found at the carburetor’s side.

Step 4: If your engine has electric ascension, you will need to move the starting motor. Unscrew the bolts holding it in place. There should be two, one in front and the other behind the carburetor. The bolts can be unscrewed and removed.

To remove the bolt behind the carburetor we recommend using an “S” bend wrench.

Step 5: Disconnect the starter connection at the back of the electric ascension unit.

Step 6: Remove the fuel line that feeds into the carburetor.

Step 9: Remove the linkage at the front of the carburetor.

With the carburetor removed, you can now inspect the vacuum lines as well as the reed valves and proceed with cleaning or substitution. 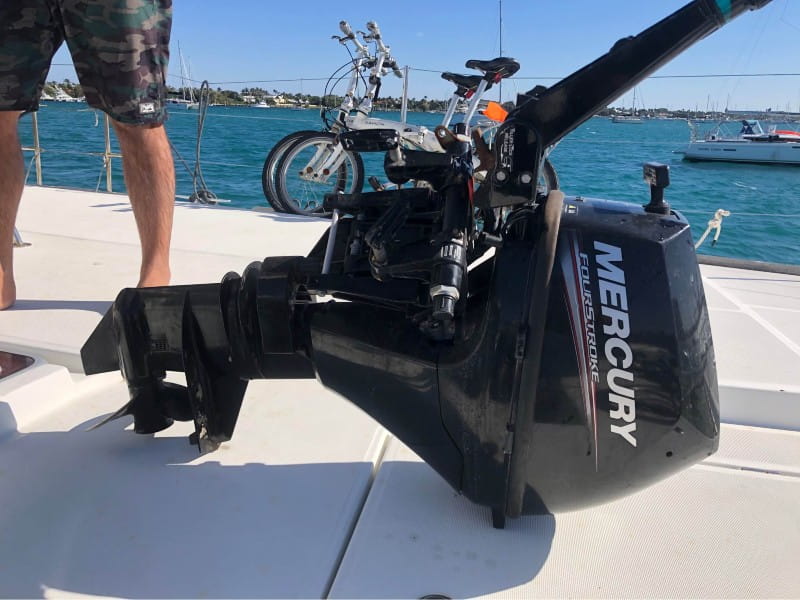 Depending on the model of Mercury outboard motor and the year of production as well as horsepower, the outboard may feature a single carburetor or three carburetors which will influence carburetor position and removal procedures.

How to Clean Carburetor on Pressure Washer?

How to Clean a Small Engine Carburetor? 10 Steps